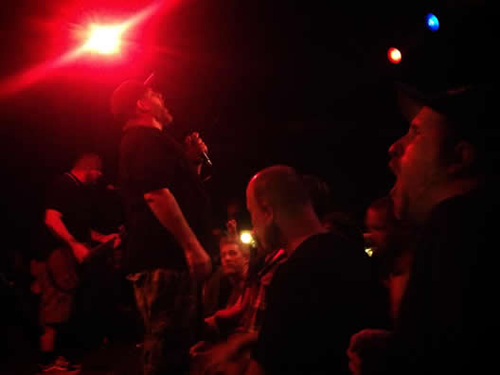 If you ever need to find me at a
7 Seconds show, check the front row.
(Pic courtesy of Allyson Seconds.)

The Catalyst is a great venue, with a layout reminiscent of VFW halls.  Staff were all very courteous, plenty of room for merch tables, good viewing of the show from the bar area, and everything sounded great.  Being walking distance from various music stores doesn't hurt much either.

As per usual, 7 Seconds showed up and played a blistering set from beginning to end.  I've driven many hours to see 7 Seconds (and flew to LA once for a show at The Troubadour). It is always worth the effort.  My throat disagrees with me  -- 2 days later, I am still hoarse from screaming along to the entire set...I wouldn't change a thing. We heard several songs off the new (and totally brilliant) album "Leave A Light On", as well as a variety of songs from their back catalog, including the usual suspects -- I Still Believe, The Crew, Here's Your Warning, Young Til I Die, and others.  Personally I wish more songs from "Soulforce Revolution" and "Ourselves" would make it into the shows here and there.  The complete set list is below (Note: In the encore, "Skins Brains and Guts" and "My Aim Is You" got skipped. Instead, "Trust" was played by request, followed by "99 Red Balloons").

Dear The Interrupters, you are my new favorite band of the moment. I knew nothing of you before Sunday's show. I am now a fan. A big fan. A big big fan that was intrigued from the minute you walked on stage wearing matching outfits, through the set of extremely catchy songs (including a great cover of "Sound System" by Operation Ivy), and through every minute of the stellar stage show.  If I hadn't been so in awe, I might have taken more/better photographs.  Please come back to northern California so I can further gush over you like a teenager.

More pics from the show can be found here.