I read the news last night about Chris Cornell passing away, just a few minutes before I went to bed.  I’d only seen one or two links, to sites I quickly dismissed as basically click-bait.  While I didn’t write it off as hoax entirely, I didn’t dwell on it too much either.  And I went to sleep.

Then I woke up today and saw that the news was real. Chris Cornell had passed away.  And it sunk in.

Coincidentally just 2 days ago I was talking to friends about the upcoming “Singles” soundtrack reissue, and how much that album has meant to me.  Pretty sure I’m on my fourth copy of it. (Three cassettes: 2 were stolen, 1 melted. Currently rockin’ it on CD.)  Chris has a great solo song on it, as well as the amazing Soundgarden track “Birth Ritual”.

That soundtrack was in my car stereo when my Corolla was broken into at college one night.  (I’m fairly certain I saw the thief a few minutes before he’d busted into my car, but that’s a different story.)  I remember blasting the Smashing Pumpkins song, with the windows down, as I parked to go to class that night, only to come out hours later and find my window smashed, stereo gone, along with the Singles soundtrack tape.  Coincidentally when my previous car was broken into and that stereo was stolen, I was also listening to the Singles soundtrack.

In high school I discovered “drop D” tuning for my guitar.  The first song my friends and I learned that way was Soundgarden’s “Outshined”.  It’s still something I regularly play for kicks when sitting around my apartment, strumming a guitar.

Shortly thereafter I discovered the song “Hunger Strike” from the Temple of the Dog record and fell in love with it.  Really in love with it — “Hunger Strike” was one of those songs that immediately grabbed me on a very personal level.  I bought the Temple of the Dog cassette instantly (and am now on my 4th copy of that album as well: 1 stolen cassette, 1 cassette destroyed from use, 1 CD, and the 2xLP vinyl reissue).

“Hunger Strike” also being in drop-D, this meant I now knew TWO songs in an alternate tuning. My high school cover band began rehearsing it shortly thereafter.  This being the early 90’s, we all had Floyd Rose locking tremelos on our guitars — switching to drop-D for 1 song proved to be an exercise in futility.  Time to buy a second electric guitar; and so, the guitar buying habit began.  I’m up to about 15 now. Thanks, Chris.

Any time an issue of Guitar Player Magazine had a Soundgarden song in it, I’d learn the song. It was never a straight-forward 1-4-5 set of blues chords.  There was always some new tuning, chord voicing, melody phrasing in their riffs, something that was new to me.  Eye-opening. Inspiring. That’s still true today, whether I’m learning a new (to me) Soundgarden song, or playing one from years earlier.

When I was 20 my then-living situation was going away, quickly, and I needed to find a new place to live.  A co-worker introduced me to a military friend of hers that needed a roommate to watch his stuff while he was deployed.  He was big into video games (me too) and playing guitar (me too).  We talked at a party and were trying to learn more about each other, to see if we’d be good roommates.  He had a guitar in his room and taught me how to play “Fell on Black Days”.  We got along immediately.  (I ended up moving to Walnut Creek and couldn’t be his roommate, sadly.)

Six months ago we had the election that rocked our nation.  Coincidentally that weekend Temple of the Dog were doing two shows in San Francisco. Desperately needing to clear my head and focus on creative, positive, things for a while, I booked a hotel room in Oakland, went to a recording studio workshop, saw Garrett Klahn (of Texas Is the Reason) play at Hotel Utah, and topped off the weekend with an expensive ticket to see Temple of the Dog in SF.  It was worth every penny; they were 10 times better than I’d already hoped they would be (despite not playing “Chloe Dancer / Crown of Thorns” as I had hoped they would).  Again, Cornell and company were eye-opening. Inspiring. Not just because they played the entire Temple of the Dog album (and a slew of Mother Love Bone tracks).  And not just because they covered Bowie’s “Quicksand”.  Their show was already mesmerizing, long before getting to their rendition of The Cure’s “Fascination Street”.  And that just cinched it. Driving 100 miles, paying for a hotel and a last minute ticket were worth every penny. Thanks, Chris.

And there’s the time I saw Soundgarden at Lollapalooza ’92 in Mountain View.  And the Audioslave record that’s much better than it gets credit for.  And the Cornell solo material that also gets lost in the shuffle.  And his gift for cover songs - Billie Jean, the aforementioned Fascination Street, One (both the U2 and Metallica songs with that title, combined into one beautiful gem).  So many more things we could list that he’d accomplished, that continue to be inspiring, challenging us to make more, better, art.

Pictured below: my Cornell-related collection: 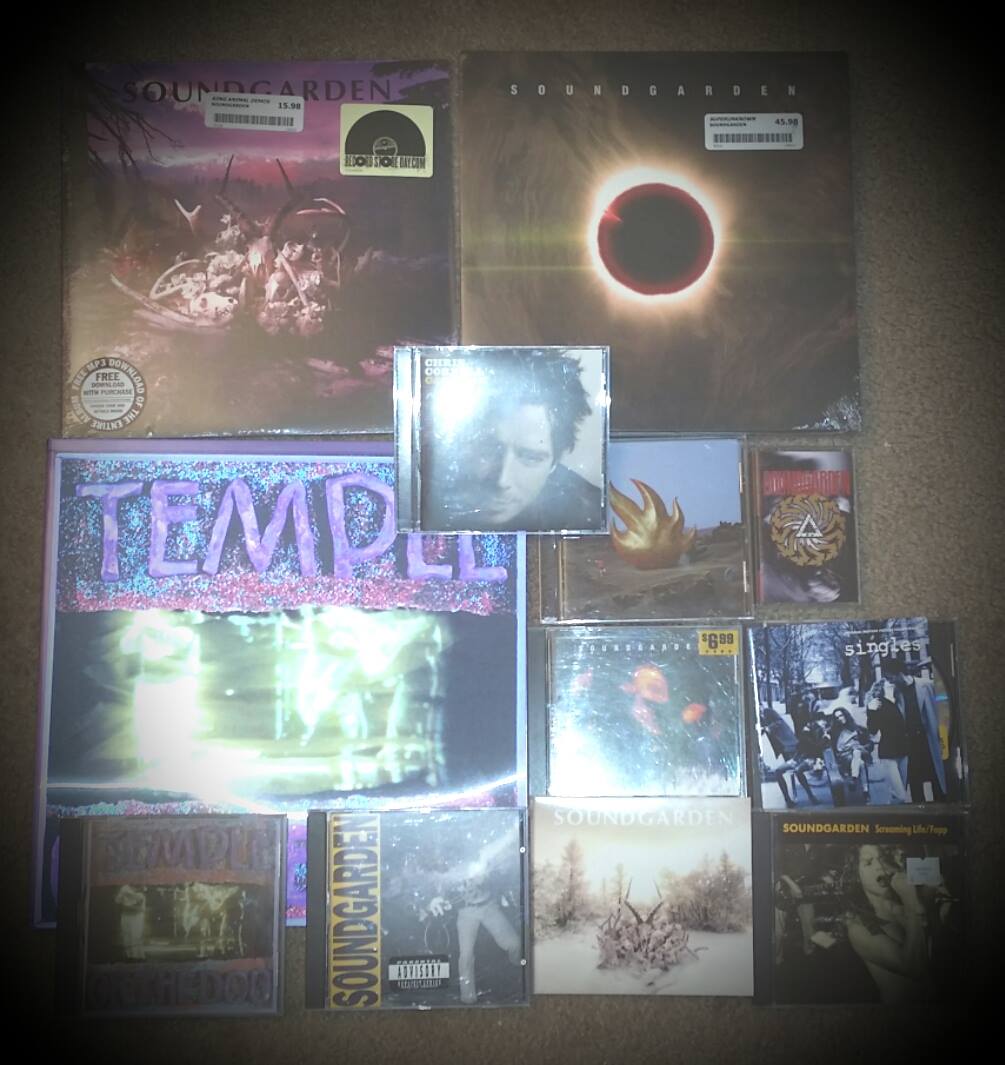