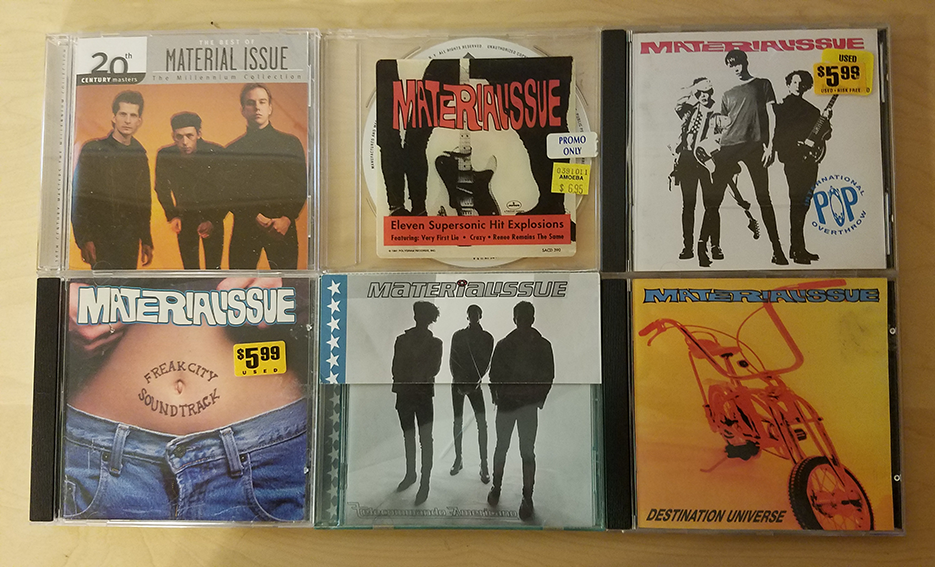 Material Issue are already a criminally underrated band — everyone knows that. We’ll save the spewing about how they should be huge (but instead are a long time best kept secret for those of us that remember them) and instead just focus on 5 of their deep cuts that really should be well known singalong tracks for the masses.  “Valerie Loves Me”, “What Girls Want”, “Diane” — the band knew how to make a big pop song. And some became their singles.  Others are equally amazing, yet buried on the albums. In no particular order…

1. She’s Going Thru My Head

Ninety-nine percent of the Material Issue discography is songs about girls. All of the singles the band released were songs about girls. So what makes this one a stand-out deep cut among the others? For me, it really comes down to one lyric: “She’s playing my very most favorite Sweet record”. The delivery of that line is unique in a number of ways. The inflection and syllables in the words are different than anything else in the song. It doesn’t match the rhythm of any other verses. Plus, who in the hell references Sweet in the middle of a 90’s pop song?  If Jim wasn’t talking about a real-life event with a real-life girl, I’ll eat my “Freak City Soundtrack” CD.

2. Going Thru Your Purse

This song is every bit of a raging hit as anything else released in the 90’s.  And forget the typical lovey-dovey song content.  While there have been songs written from the perspective of a jealous boyfriend before, none that rock this hard come to mind. It’s not mopey, or apologetic. It’s a big huge real-world anthem for now insane guys can get at times.  And as an added bonus, it includes one of the best drum breakdowns in all of pop music.

3. What If I Killed Your Boyfriend?

I’ve put this song on more mix CDs than I can remember. Yes, for girls. Yes for girls that I wasn’t dating but wanted to be. No, it usually didn’t work. But man, for those 3 and a half minutes, Jim Ellison definitely knew how the underdog felt in those situations.  Emo pop before emo pop was a thing. Dashboard Confessional has got nothing on this.

Proof that Material Issue inspired more than they got credit for: the band StereoFuse recorded a cover of this song and released it as a single of their own. So that makes two times this song has been released as a single, and stupidly dismissed by the masses instead of scooped up and embraced the world over. It is a musical crime that this track was not one of the biggest 90’s power ballads.

A finely crafted country-folk song hidden inside a big power-pop song on an even bigger power-pop album.  (I’ve covered this song live at my own shows dozens of times.)  “Next Big Thing” features some of the most descriptive and imagery filled words to ever appear in teh verse of a pop song. You can picture them sitting at the bar, her roommate, their apartment, the whole thing. It’s an entire movie in 3 minutes and without the video. The video isn’t necessary — Jim’s words are enough.

It’s a cover song, and to my knowledge there isn’t a studio recording of the MI version, just this live track on their Greatest Hits comp.  This song has been covered by dozens of acts.  For ages my favorite was the Surf Punks rendition.  While I still enjoy their take on it plenty, listening to it never made me want to play the song live with my own band.  Material Issue’s take on it put me over the edge. They had that extra bit of energy above all the others that have given this song a shot.  It’s now on my “todo” list to teach this to my own bandmates, all because of Jim and company.

I assume this is Jim’s aforementioned “very most favorite Sweet record”.  And I hope he’s listening to it on “repeat”, wherever he is.